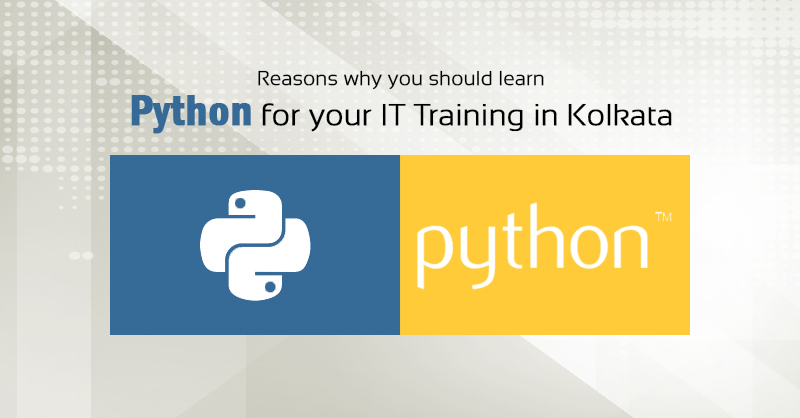 If you are looking for the best IT training in Kolkata, find one that teaches Python, since it is a very easy as-well-as important programming language which can be learned both by the beginners and experienced coders in the job market.

Per say, although this a relatively new programming language, yet Python is one of the most popular languages used by several developers in big and high profile multinational IT firms.

This is because Python that was conceived in the late 1980s by Guido van Rossum at Centrum Wiskunde and Informatica (CWI) in the Netherlands and its implementation began in December 1989 is not as complex as C++ or Java.

In the recent times, all present-day programmers cherish coding in programs that come with Object Oriented feature, since it provides the function of re-usability of the codes, and developers like coding in Python as it is also a modern Object Oriented language that supports Imperative Programming.

Following are the reasons why Python is so popular among students looking for IT Training in Kolkata :

As even mentioned earlier, Python is a very easy programming language to learn, as its syntax resembles the English language.

Hence, printing “Hello World” is easy to print with Python, if you compare it with other programming languages.

Being extensible and a portable language, developers can use Python to develop any cross-platform applications with ease.

This means, applications developed on Python can run on Windows, Solaris, Linux, and others.

Moreover, even if you have developed components in.NET or Java, it is possible to use these application components in Python seamlessly.

You can also invoke C++ and C libraries from Python applications.

Popular frameworks like Flask, Django and Plano have been developed using Python language. Therefore, much like PHP and ASP.Net, you can create advanced websites and e-Commerce sites using any of these frameworks.

Additionally, assisted by Python language you can do web-scrapping and fetch data from other websites.

This can be interesting to know for students looking for the IT training in Kolkata to learn Python, that Pinterest and Instagram were created using Python supported frameworks.

Python has libraries like TensorFlow and Keras which are written in Python language and is used for machine learning. Apart from that, it has libraries such as OpenCV that helps computer vision or image recognition.

Hence, as AI or Artificial Intelligence is the future technology, learning Python is the need of the hour for students who want to build their carrier in AI technology.

Python has the capability to handle complex data and hence is the first choice for Big Data processing.

Pydoop, Dask, Pyspark are libraries in Python which helps in writing MapReduce program in Python and process data present in the HDFS cluster.

This is a fascinating module that you can learn in Python. Although the size of these microcomputers is as small as a debit card, using this module one can create arcade machines, robots, remote-controlled toys, and even mini cameras. Moreover using Sonic Pi, you can also create music.

Apart from all these factors, Python even has a very large community support which is growing fast.

Therefore, if you are looking for the best IT training Institute in Kolkata to learn Python and remain updated about the prevalent trends in the IT world come and join Onward Academy , which is located at Ultadanga in the Northern part of the city.

Onward Academy has potential expert faculties, who can ensure that you accomplish your dream role in your desired IT jobs with a guarantee of a rich and extensive training experience.

For more information about Onward Academy call 08583993053 or write at info@onwardacademy.in.

We provide 100% job assistance after completion of our course.